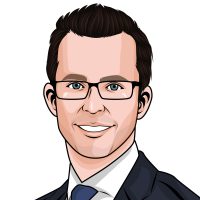 James is named as a Leading Expert in the independent directory Chambers and Partners and leading individual in Legal 500.  This year’s guide describes him as “thoughtful, astute and very good at spotting new angles”.

James has expertise in all aspects of family law but specialises in divorce involving complex financial issues. He has acted for and advised a wide range of clients from teachers, doctors and lawyers through to celebrities. He has particular expertise advising entrepreneurs and their ex-partners/spouses having acted in cases involving £100,000 up to £100 million at every level from Magistrates Court to Supreme Court. James strives to protect his client’s privacy wherever possible but two recent high profile clients include Stacey Giggs (wife of professional sportsman Ryan Giggs) and David Ginola (former professional footballer and French media celebrity).

James’s reported cases include the Supreme Court case of Sharland v Sharland [2015] UKSC 60 – a technically complex case and one of a handful of family law cases deemed significant enough to be heard by the Supreme Court and Giggs v Giggs [2017] EWHC 822.

He trained and worked at London’s leading family law firm prior to returning home to Manchester in 2007. He joined Pannone to work with the renowned Beth Wilkins before moving to JMW in November 2011 and becoming a Partner. Together with Sam Hall, James helped JMW swiftly move from Tier 4 in the leading independent legal directories to become a Tier 1 family team.

He prides himself on his accessible, no-nonsense approach. He is a robust and thorough advocate for his clients and is not afraid to be firm when required. However, as Chambers and Partners guide acknowledges, “he thinks creatively about solutions,” to bring his clients resolution as swiftly and painlessly as possible.

He has also written for various legal publications including The Solicitor’s Gazette, Family Law, LexisNexis and Family Law Week. James also lectures to other lawyers and professionals and has spoken at The College of Law and Manchester Law Society.

One common feature of divorce is how often spouses whose marriages have ended talk about being determined to make the most of the opportunity for a fresh start in life….